"The Server was Palomides. The clan hit Dark Age of Camelot (DAoC) running. Within the first few weeks we had many members effective at Realm V.S. Realm combat and the clan was getting a reputation for its prowess, leadership, and member loyalty. WarOx was the acting division leader. He came in with great leadership and dedication. He was an active leader but absolute power often corrupts absolutely. Some say he became a tyrant, others say he had a vision. Still others say he went insane. Whatever the case was he got too big for his britches and his temper caused him to kick members and even more simply left because they did not want to deal with his nepotism and obnoxious attitude. Eventually the Knights of The Crown stepped in to investigate but it was a day late and a dollar short. We had already lost many good members because we trusted WarOx's word over the accused, bitched-out and kicked. Finally, T-Bird playing as an alt toon witnessed the dictatorship first hand and action was taken. Abion was promoted as new Division Leader. Warox took the long walk."

BK was the first guild formed on Palomides. We worked hard, and worked together, as always, to get the guild formed quickly. 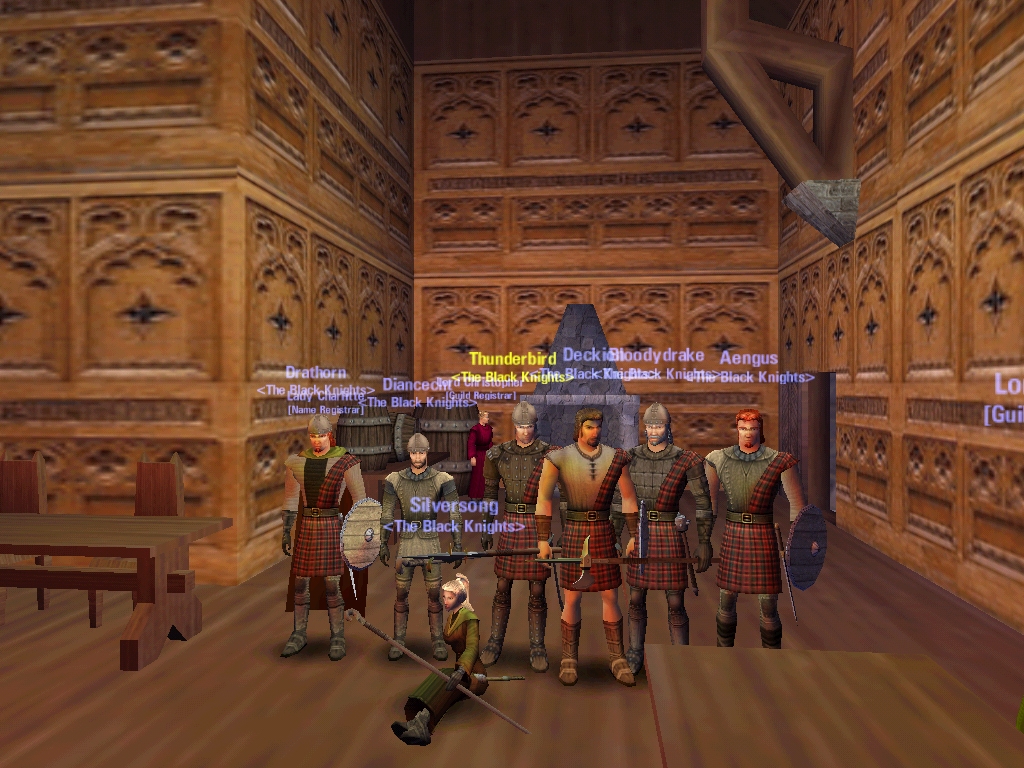 BK was growing large and powerfull and spanning multiple games. It was time to start making our structure even more detailed. We had already layed the clan out with a rank system, but we needed more. T-Bird had his hands full trying to run a clan that now regularly spanned multiple games. So the title of Division Leader was created. BK would now have a seperate leader for each game they played. And this leader would be given absolute power, unless T-Bird's intervention was required. 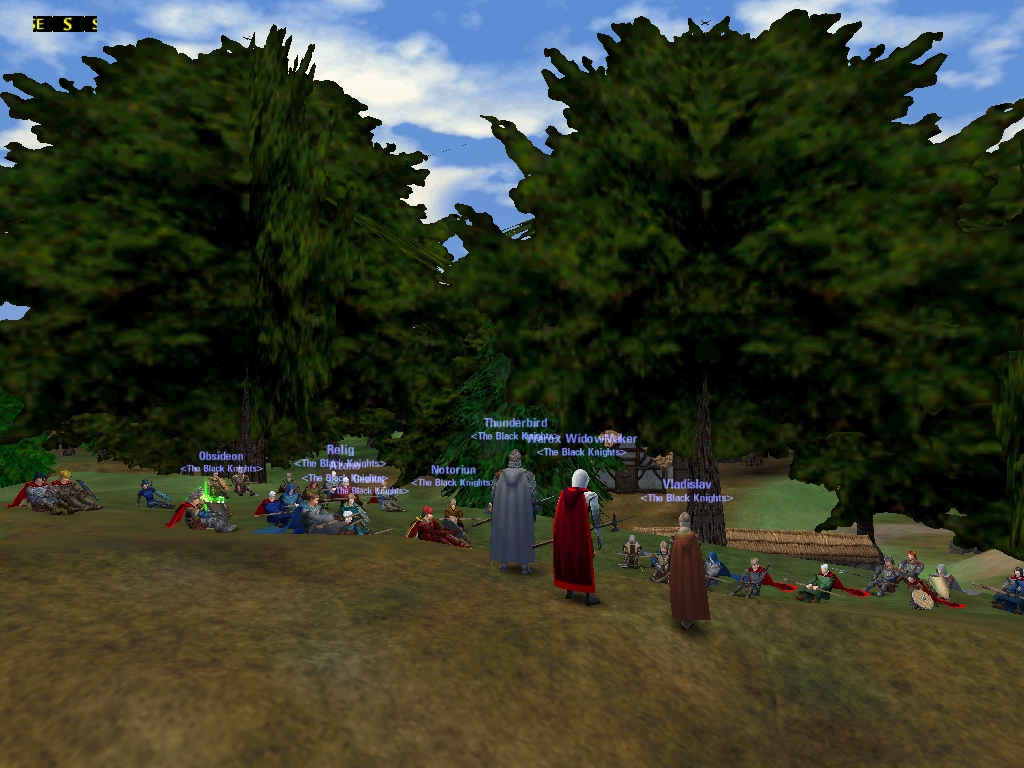 "HOW THE F*** DO YOU COMPETE WITH A GUILD THAT HAS 800+ MEMBERS IF IT ACTUALLY STAYS THAT SIZE LIKE BLACK KNIGHTS. " (posted by Neutron on VN boards)

PvP. The real deal. We started out with a few of people in Beta. As usual T-Bird's connections got him in on the early stages. Then Mordred went into open Beta. We scrambled to get our guild formed and started playing around. We got ganked pretty hard the first and the second day. T decided to experiment with open recruitment. Every rank was empowered to invite squires in to the guild. In about one hour we reached about 300 members and people were beginning to get annoyed at all of these Black Knights running around killing everybody and everything. Within the next hour our 300 inviting players resulted in 1000+ members and the mass recruitment continued. After the first night of our open guild policy we had close to 3000 members.

Through the course this night guild chat REALLY got out of hand. Some bastard spammed it and the 'Looking for group' messages got out of hand. This is when we decided to only give Squire Rank and above guild chat privileges. The initiate ranks were named members and you became a squire at rank 2. To become a squire you had to go to the homepage and apply for membership. Within maybe 30 minutes we had approximately 200 new applicants. To become promoted in game people had to /tell an officer this resulted in a tell hell. The Black Knight (BK) officers were so swamped with tells that they died regularly in-game due to 'excessive conversation'. They were flooded with about 60 tells per minute and every other messae was a 'Why can't i speak in GC'. Ivelise handled most of the tells the first night/day together with Greyclouds I believe. After this and combined with some serious guild chat moderating our guild chat actually went ok. Torquemada, Ciipher and others stepped up taking responsibility and lending leadership. A lot of guilds tried to copy us and some of the new recruits had been members in these copy cat guilds. Although they never came close in members several of our members that originated in these guilds professed that their guild chat was much more out of line than ours. So even though Mordred were very chaotic our officers worked very hard and managed getting some control over the events. We were very, very unorganized in grouping/leveling but still managed to have some fun.

At some point we decided to take over Adribards retreat and make it our own. It was a BK invasion. Anyone coming close to Adribards retreat got killed quickly and ruthlessly, often swarmed by a million lower leveled players. This continued for a few days. When it was time for Mordred to come out of open beta (they weren't sure if they would reset characters or leave everything. On message boards one of the main reason people wanted servers reset was 'The damned BKs that had destroyed Mordred'. Some people wanted a cap on total number of members allowed within guilds. Well this went on for a while but with the chaotic team chat and the trouble of organizing people to level plus our EXTREMLY bad reputation on Mordred we decided to roll back web based database so that only original members showed up and then we Moved to Andred with the 'real' BK members with a shadow operation.

On the political side, there were weeks that alliances were very shaky because truces weren't communicated well down the ranks for any of the open recruitment guilds, which led to endless tells of 'This guild attack us, I thought they were friendly', 'Who's friend, who's foe?' etc. etc. Before we left we ended up with over 3,700+ members. Everyone hated us because almost the entire server was Black Knights! LOL.

A not so new start, our tarnished reputation preceded us. Once again we were the Guild they loved to hate. Many of our enemies had followed us. However, without the disastrous open recruiting policy in place we reestablished ourselves as the Noble Guild that we truly are. I have fond memories of hunting our enemies in Arbitrards; The Commie Patrol specifically Jack Burton, the ex-BK that got kicked for being an overall dumbass Airnuker. Hahah, that boy would get owned regularly. There where others but enentually the sheer numbers of our enemies started to get the best of us and Arbitrards became a tomb for us. It got so bad that mere leveling was a task of epic proportions. Our DAOC numbers began to dwindle. This in effect made it even harder on the members that remained. Our leadership was strained but officers and members such as The Rat, Torquemada, Deckion, KDanger, Knightshade, Jennelle, Ivelise and others stepped up and took the bull by the horns. In my opinion this was actually some of BK's finest times due to the real life stress of playing in such a hostile environment. In the end however it was not enough. BK abandoned DAOC.