A month after release many of us were bored with the slow leveling and sick of being owned by the level 50s that some of us TBird & I decided to start asking our allies The Keepers how they leveled up so quick. We knew there was some thing going on that we didn't know about, because in the past we have never used these cheating measures to achieve higher levels, we just got tired of not being able to play a game we had come to enjoy due to getting ganked by the exploiters. So I got in touch with someone that had helped me out in PK'ing and asked what was the secret. After sweet talking my way into getting him to trust me, he finally told me about the bugs in quests like IceFire and Mage Academy where any level could be in the fellowship and get anywhere from 10-15 million experience each time you did it, without really having to do the action part of it.

Basically we could sit around and hunt while others went and did the quest and we could gain levels with the experience that they earned. We were also showed the big hunting spots that you could get the mobs stuck on rocks and stuff. Also brought into the discussion was us merging with The Keepers, being that Dominion fractions were the under dogs. The idea was brought up to TBird and Deckion and discussed over for a couple weeks before it was finally decided that maybe it wouldn't be such a bad idea. So the merge was done. What a mistake! We soon found out that we were only being used because of large number of members to further their little war that they had going with Cambion (a rival Shadow guild) and to protect a lifestone that half of our guild couldn't even use due to level restrictions. When we asked for help we were ignored, when they asked we were expected to jump on it. Then the arguments started over their members wanting us to break up our allegiance and swear under them so that they could suck of our experience that we worked hard to earn. Needless to say after only a day or two after the merge we went back to our old ways of just being BKs, only now we had the exploiting spots or so we thought. So after a couple more weeks of peaceful never-before-done-by-BKs exploiting we started getting attacked by all the other monarchies that now knew about our hunting spots. After numerous nights of being killed over and over again by rivals and never being able to hunt some of the higher levels decided to throw in the towel on AC:2. 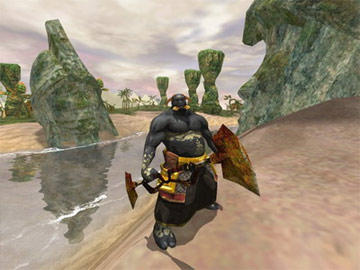