We returned to the roots of The Black Knights. The very core of our Clan. The strategy, action, and teamwork elements of Battlefield 1942 personify us. This is the foundation that the Guild was formed upon. Though we did not enter the fray with monolithic numbers, we came in with strong bonds of friendship and a like minded goal to win. Our members are highly skilled and we remained at the top level of the skirmishes and game matches that we were involved in during the Demo Days. This trend continued with the launch of the full game.

Dark Phoenix was promoted to Division Leader because of his impeccable skill and obvious leadership quality. Once again BK was on a meteoric rise. We joined the Ladder at [Ladder Name Here]. Guild training in areas such as piloting, sniping, targeting, and the infamous 'lag shooting' began. Like Mike Tyson in his prime we knocked our opponents out of the the box. Yes we are that good, as was proven by our track record. 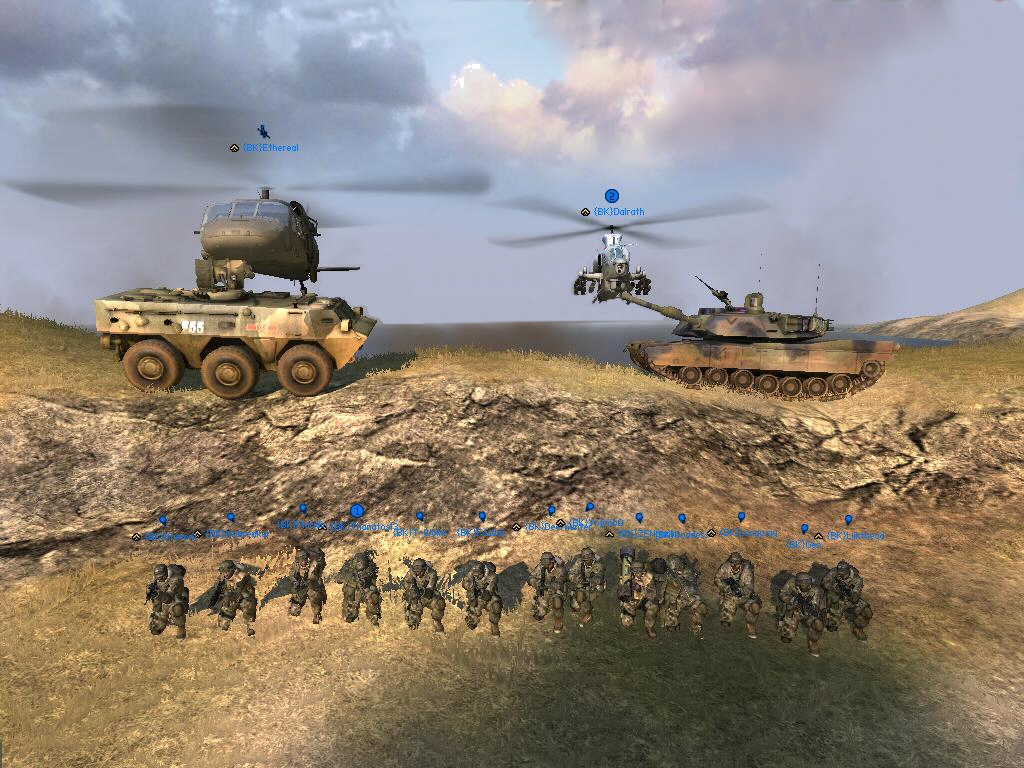 Nothing lasts forever and disaster strikes. A patch from EA changed the game dynamic and many BK's felt after the developers removed 'lag shooting' from game that it was no longer worth playing. Without the fabled 'lag shooting' unskilled players would now be equals. Mere mortals could do battle with the Gods. Dark Phoenix stepped down as Division Leader. Enter NYPD.

"I met TBIRD while playing BF42 in a pub. I was in the now defunct Clan Victory, a seemingly competent clan with a REALLY cool ass website that was flashy as hell. We were on opposing teams and killing each other pretty evenly. Well he got me one time and I stated "Anytime". Unbeknownst to me TBIRD Was in contact with CV and he got PIISSEEDD when I said "Anytime". Hehe. "Anytime" was my way of saying "good fight, much respect", to a player who I could tip my hat to but not back down on. Low and behold I saw a post on the CV message boards where TBIRD stated something to the extent that "Big Mouth" players like me gave good teams like CV a bad name. I was laughing my ass off at that, and came to the BK boards to tell him that I meant nothing by it, and that I respected his BF skills. After coming here and reading the BK history I book marked the page.

Well CV fell apart so fast, it made my head spin. TBird was good enough to sit in on a CV chat that was discussing whether or not to keep the Clan together with what we had. He had offered to absorb the remaining members of CV into BK and made us a pretty good offer to come over. Well I was recruited, and became LOR rather quickly. I loved it here. So much so, that I enjoyed BF42 even more by playing with BK. I saw this clan had more than most, and that was a bond of friendship that no other clan I’ve ever been a part of had. We treat each other as real people.

Well the FIRST BF1942 patch came out. OH MAN did that send the division for a tailspin. Dark Phoenix and TBIRD put down their joysticks, and a lot of others lost interest in the game at the same time. I RAILED and shook my fist at the heavens, and the message boards to hold the clan together. I was a psycho about being devoted to playing, posting on the boards, and just kicking ass and taking names in BF42 for BK. That got me noticed I suppose. When DP decided to drop out as the division leader, He had offered TooTs and I the reigns as co-leaders. Well TooTs’s schooling became a priority and the Task fell to me.

During my tenure, we did well at first in competition. We managed to hold our standings on the SG ladder at number 2, only losing to d.mise whom everyone thinks cheated. I got us back on the TWL ladder as well, and we never really rose very high. I recruited like MAD. I met a couple of guys from DOW-the Dogs of War. Templar and T-Wolfe were quite talented, and we impressed them at the same time. Templar had asked me if we had a server, and when I told him we didn’t he had offered it to us. I then extended the same offer to the DoW guys that was given to me in CV. they transitioned smoothly into BK, and we quickly became friends, and also acquired our incredible server, and Teamspeak, which the entire guild uses on a regular basis. Templar and I also developed the squad system for the division, and the teamspeak channels. I intuited a weekly practice schedule also. All of those efforts had mixed results, but over all i feel worked out well.

AT THE VERY least, many average players of BF42 became OUTSTANDING players. I am most proud of Lohan, my Sergeant from squad A and Spire who right now is probably the best player this division has ever seen. (Next to me of course. J/K) The last thing I must say that I am proud of, is rekindling TBIRDS love for BF42. I found the Desert combat MoD, and posted the link for it on the boards. Well everyone fell rapidly in love with this mod, and with the advent of helicopter flight, TBIRD was again a regular on the battlefield of BF42. Well sometimes life happens. The stress of my current job situation, and other real life issues compounded the Stress of Leading a fantastic division. I felt I’d be doing more harm than good . I didn’t want to step down, but I did quietly and gracefully. I recommended Lohan for the role of Division leader. When I came here I also mentioned that I Love MMORPGS and ShadowBane was one that I’ve been waiting for over 2 years to play, I took to assisting BK in the Shadowbane division and left BF."

The BF division has grown into a nice sized group of people. That , with the new patches , have made the game alot more fun for most of the dedicated players. We have enjoyed success and failure as a group but we kept coming back for more. 12v12 was alot of fun even if we went 1-7 as a unit. There were many battles in which we had a good showing as well as put up a great fight. Then there were some battles where we were just totally overpowered. When you can’t fill a roster you will be at a huge disadvantage against teams who play nothing but BF 24 / 7. After bearing little success at 12v12 , we put it behind us and joined the 8v8 ladders. So far , we have been involved in only one match. Once again , fielding regular BF players continues to be a problem , one which will soon be corrected. {BK} has added some great BF players and most anyone who has played against us can say they were in a fight. Some of these players are always being accused of "hacking" and would get "flamed"during gameplay so l think that says alot about their skills. Some of the guys would be angered and would flame in retaliation but , since we don’t believe in grieving openly , that practice doesn’t show itself very often anymore. Then there is the BFSECURE download. EA made this a mandatory must.This was supposed to eliminate cheating but it is so confusing and not to mention you must be logged onto 2 servers just to play a match. Now that has to take away from the quality of gameplay , unless you are running the "MOTHER" of all computers. About the same time of BFSECURE’s release , version 1.6 was introduced to community.This patch added new maps and improved interest of the game. Also , PunkBuster was introduced with the 1.6 patch. This addition has yet to be tested in the community , but l think it was needed

T-Bird - "During the prime of BF1942, back in the begining, I would constantly get accused of cheating.  Players would vote kick me off of every server, even just recognizing my name when I first joined.  My name was being slandered on the message boards.  I had no way of proving I did not cheat.  So I set up a video camera, downloaded a *cough* trial copy of some video editing software, and changed my name to Blue Angel to assemble some footage to prove I do not cheat.  Here is that first video"

The video became wildly popular.  I not only stopped getting kicked everywhere I played, but I started getting flooded with requests to make another video.  Gaming videos all but did not even exist yet.  Putting gameplay clips together was just unheard of at the time.  So I created my second video ...